Organized Crime and Elites in Colombia

The roots of organized crime in Colombia were sown since independence by the lack of government presence in many parts of the country. The tradition of contraband smuggling created trafficking expertise and a tolerance for illicit activities. Near constant political tumult meant bands of marauders, thieves and kidnapping groups, who often thinly disguised their criminal activities under the banner of one political party or the other.31

The failure of land reform also pushed populations to colonize remote areas, where illicit crops were the only viable means of support.32 These crops included marijuana, poppy — the raw material for heroin — and coca, the raw material for cocaine. In the 1970s, Colombians moved to take control of the most important of these illicit businesses: the cocaine trade. Coca was not produced in large quantities at the time in Colombia, but Colombians began developing the most efficient means of processing it into a consumable white powder and transporting this byproduct to points north. 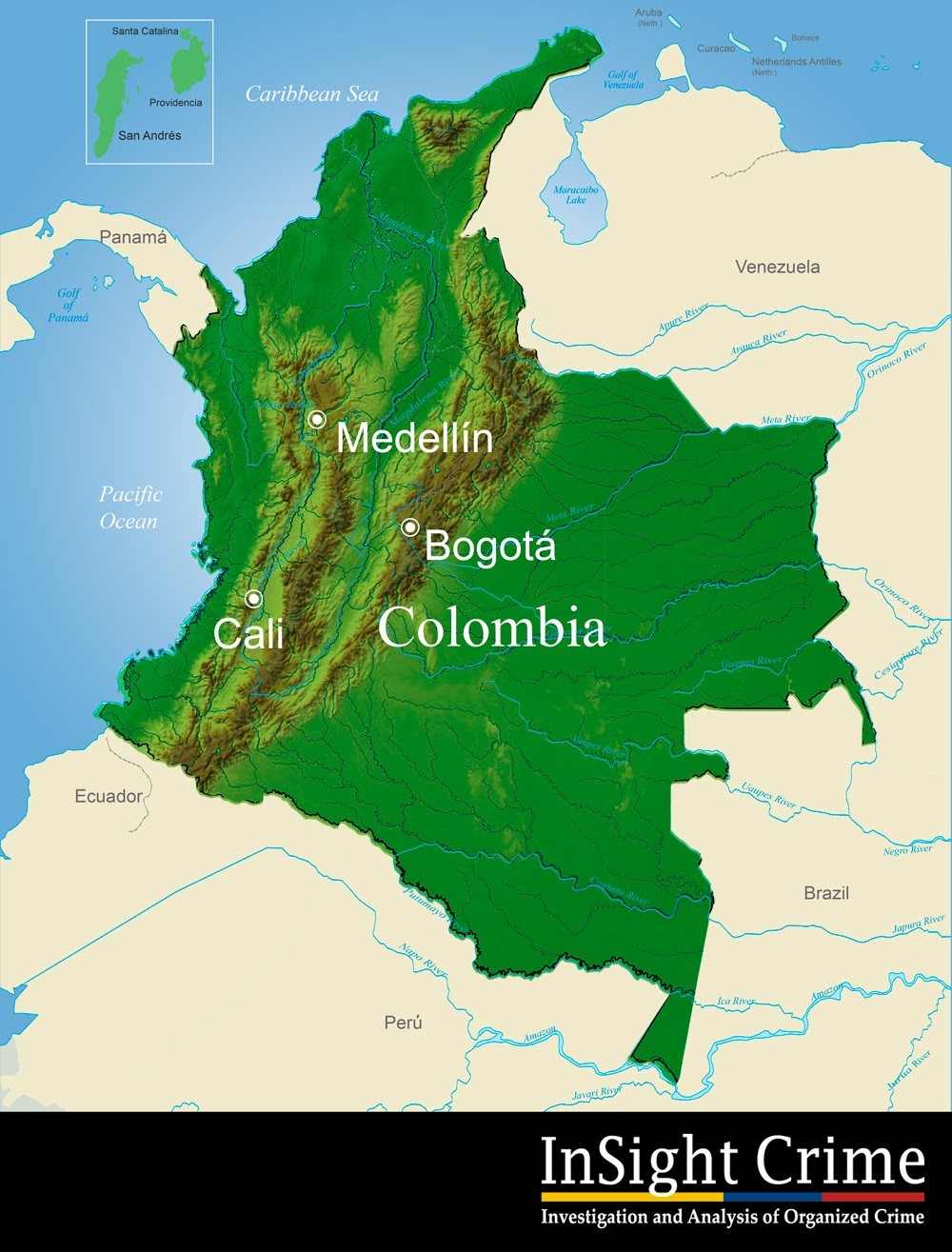 The pioneers were, of course, Pablo Escobar’s Medellín Cartel and its lesser rival, the Cali Cartel. These first-generation Colombian trafficking groups were hierarchical, vertically integrated organizations that controlled each stage in the business, from production to distribution.33 They sourced coca leaf from its primary production points in Peru and Bolivia, processed it in Colombia, then shipped the cocaine to the United States, where their operatives sold it on the streets. Illegal drugs created regional economic booms in the 1970s and 1980s, kick-starting certain industries, such as construction, bringing a flood of illicit dollars into the country, and creating massive wealth for some of those involved in the industry. By the 1990s, revenues from the trade made up an estimated 4 to 7 percent of Colombia’s GDP.34

Economic crises in the 1970s also pushed some members of the commercial classes to seek new economic opportunities, particularly the industrialists of Medellín. In Colombia’s second city, which would become the cradle for the cocaine business, “local businessmen turned to the cocaine industry for infusions of capital,” which later helped to “cement the [drug industry’s] ties to the Colombian elite.”35 The economic downturns also swelled the ranks of the unemployed, creating a large pool of manpower for the drug trade.

The FARC gradually moved to take advantage of this new source of funding. The group first began taxing marijuana growers in the 1970s, then coca growers. In the early 1980s, they decided to impose taxes on the traffickers themselves. This would be an enormous boost to their finances and change the face of the civil conflict.36 The FARC used the new revenue stream to expand its areas of operation, to increase its number of fighting units — or “fronts” as they are known — from 17 in 1978 to 28 in 1984, and to invest in weapons, uniforms, and communications devices.37

In the same period, the guerrilla groups ramped up extortion and kidnapping, targeting rural landowners, business people, and any members of the population who appeared as if they could pay a ransom. For the first time, Colombia’s guerrilla insurgencies were really hurting the elites, and the elites decided to act. In the Middle Magdalena Valley, valuable farming land that would be a crucible of the conflict, local elites began meeting with representatives of the army to discuss founding rural “self-defense” groups to help the military to fight the rebels, which was legal under a 1968 law. The landowners would soon gain a powerful new ally.

Emerging or periphery elite (aka ‘Narco-elite’) 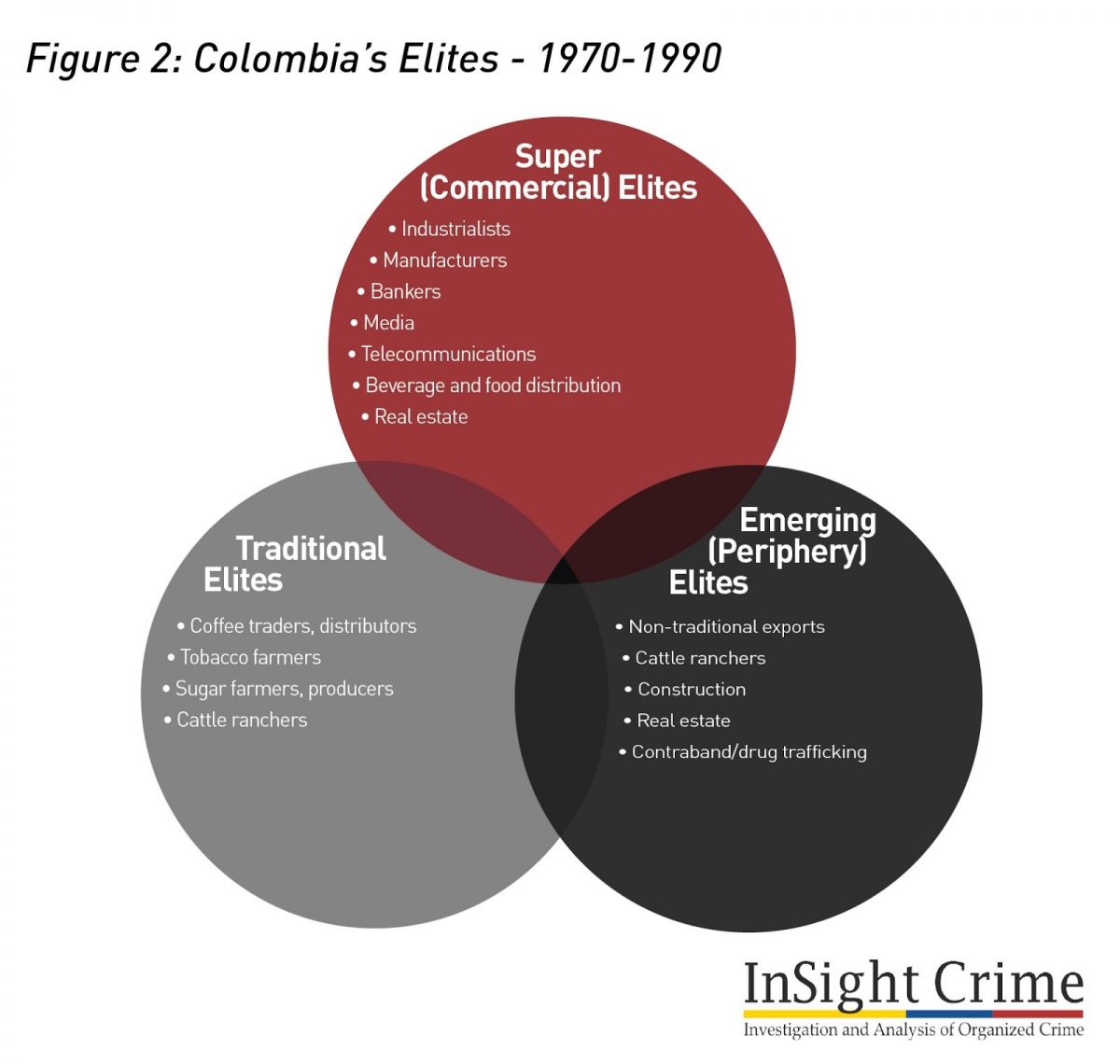 As well as fueling the rebels’ bid to overthrow the government, the influx of drug money created a new elite. As Thoumi says, the accumulation of “very quick and large individual fortunes … changed the power structure and nature of the elite in many regions.”38 Members of the working classes were quickly propelled to wealth, forming a “clase emergente” (emerging class) or what some called a “narco-elite.”

Escobar and most of his partners in the Medellín Cartel, for example, were from humble social backgrounds. The Medellín Cartel members were able to use their new-found wealth as a shortcut to join the landowning class. Escobar and his business partner José Gonzalo Rodríguez Gacha, alias “El Méjicano,” for example, bought up swathes of land in the Magdalena Medio Valley. The land was sold cheaply by people escaping the rising guerrilla threat, and traffickers used it both as a status symbol and a means to launder their wealth. They were, in the words of Steven Dudley, “purchasing their way into the landed gentry.”39

The mass purchase of land by drug traffickers was so substantial that it is known as the “counter-reform” — skewing Colombia’s land further into the hands of the few. In all, it is estimated that the drug traffickers bought up to 5 million hectares of grazing land in Colombia, some 15 percent of the total.40
With their ranches, the traffickers formed a “new rural elite,” in some places completely replacing the old landowners.41 The traffickers’ ascension into the landowner classes would eventually allow them a deeper integration into the elite, as they became useful to the political class in the fight against the guerrillas.42
This was not just a political struggle. As landowners, the traffickers themselves became vulnerable to the same guerrilla attacks that threatened the traditional elites. They soon joined forces with local elites to fund what were called “self-defense” forces, which were supposedly set up to fight the rebels, but which often targeted social “undesirables,” unionists, and other groups perceived to be a threat to elite interests. These groups were precursors to the United Self-Defense Forces of Colombia (Autodefensas Unidas de Colombia – AUC) paramilitary army.

As drug traffickers consolidated their gains in the 1980s, a change was taking place in the ranks of the political elite. The three-decade power-sharing agreement between Liberals and Conservatives came to an end in 1986, when the Conservatives refused to join President Virgilio Barco’s Liberal government. Colombia was moving towards increased decentralization. A 1986 reform meant that mayors were directly elected, rather than appointed by the governors. The new constitution of 1991 bestowed increased autonomy and control over resources to local governments, and established the popular election of governors. All this gave more power to elites of Colombia’s peripheries, who had long been powerful in their local spheres, but removed from the center of national power in Bogotá. It was a profound change. As Francisco Leal writes, “The regional elites ascended to the national stage, to the detriment of the ‘natural bosses.’ For that reason, the so-called traditional political elites are a thing of the past.”43

The drug boom helped propel these regional elites from Colombia’s periphery to the center of power in Bogotá and Medellín. The sudden influx of money to peripheral areas dramatically changed existing power structures and distribution of wealth. The existing elites — landowners, industrialists and political power brokers — could see themselves pushed aside by rising figures, often from lower social groups, who were taking advantage of the money and power bestowed by organized crime to convert themselves into a new elite.44

But organized crime also presented the elites with an opportunity. They could be left behind in the new world created by narco-money, or they could throw their lot in with the new narco-elites and hitch a ride to power on the national scale as senators, governors, or party leaders. “When the regional political class obtains financing from an inexhaustible source of capital, and when it receives the armed support of private armies that regulate a significant portion of the social order, then they achieve a level of political influence never before seen in the country’s center,” Gustavo Duncan argues.45

But while the traffickers had gained instant economic power and increasing political power in the periphery, they had to fight for social acceptance in the center. Medellín’s upper classes blocked Escobar’s application to join the city’s top social club. His attempts to enter the political elite were also crushed when he was ejected from the Liberal Party and thrown out of his position as deputy congressman in the early 1980s. Rejected by the establishment, Escobar made the fight personal. He presented himself as a populist figure, persecuted by the political elite for his humble background and efforts to help the poor. And he mixed nationalistic fervor — especially as it related to sovereignty and the question of extradition — to stir up anti-establishment sentiment.

In addition, Escobar resorted to violence. In 1984, his assassins killed then Justice Minister Rodrigo Lara. In the late 1980s, they murdered dozens of judges and police. They also kidnapped elites and exploded bombs in public places where the wealthy and their families congregated. The violence culminated in the 1989 presidential elections, when Escobar’s assassins killed the Liberal Party candidate Luís Carlos Galán. They later exploded a bomb on a commercial airplane in an attempt to murder his replacement, killing all those aboard. In a public letter sent in 1989, Escobar and a group of other trafficking bosses aptly described this campaign as “total war on the government, the industrial and political oligarchy, the journalists who have attacked and insulted us, the judges who have sold out to the government, magistrates who have extradited us, trade union leaders and all those who have persecuted us.”46

The Medellín Cartel also penetrated the Colombian state, with high-level allies in security and justice institutions that kept them safe from prosecution. The Medellín Cartel offered officials a choice between “silver or lead” — taking cartel money, or taking a bullet. Through this campaign of bribery, intimidation and terror tactics, Escobar eventually bent the Colombian state to his will, forcing it to ban the extradition of nationals in a 1991 constitutional assembly. The drug trade eventually penetrated politics on every level. Even the national political elites in Bogotá had to contend with the immense power of drug money. The country was forced to recognize this fact, and the costs of co-existence with the powerful cartels, when it was revealed, shortly after he took office in 1994, that President Ernesto Samper had received significant campaign donations from the Cali Cartel.

But the drug trade also had its losers, among them the traditional and commercial elites. Though the traffickers grew rich, the economy suffered. By the 1990s, Colombia had entered into a social, political and economic crisis caused in large part by the drug trade. GDP was lower in the 1980s and 1990s than in the course of the previous 30 years, thanks to capital flight, increased transaction costs, and spending on security at the expense of other projects.47 What’s more, thanks to Escobar, violence had taken on a whole new meaning for the elites. If Colombia’s elites had been removed from the rural killings of La Violencia, the traffickers’ acts of mass terror in the late 1980s and early 1990s brought the violence to their front door.

Eventually, Escobar’s confrontation with the state and the elites would cost him. Although he managed to negotiate his handover and residence in a jail built to his liking in 1991, his power was dwindling. His criminal partners — sensing a shift in the political winds and feeling betrayed and worn down by Escobar’s never ending war — teamed with the government and bit by bit destroyed his empire. At the core of this fight against Escobar was an alliance of criminal interests — which went by the moniker Persecuted by Pablo Escobar (Perseguidos por Pablo Escobar – PEPES) — and the police. By late 1993, as Escobar scrambled to stay alive, the seeds were already sown for the next phase of Colombia’s criminal development.